THE WORLD’S MOST FAMOUS YACHTING REGATTA

Cowes Week is one of the longest running and most renowned sailing regattas in the world, making the town of Cowes world famous. Long associated with the Royal Family, the event began when George IV brought racing to the Island in 1826. Today up to 1,000 boats with up to 8,000 competitors take to the Solent for eight days of racing in August. 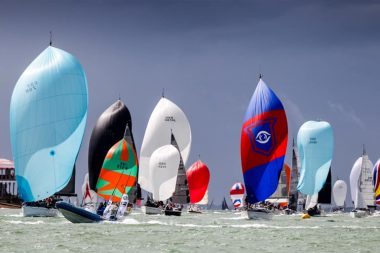 Cowes Week brings a real buzz to the town and the sight of hundreds of boats vying for position makes for a real spectator sport. Cowes town comes alive, with a plethora of live music, bars and stalls springing up around the town and along the Parade.

The Green in Cowes and Gurnard seafront offer prime viewing locations, as well as East Cowes seafront. The racing action finishes on the Friday with the end of the regatta marked by a spectacular firework display, drawing hundreds of spectators.

Cowes is one of the Island’s best towns with a great range of traditional pubs and discerning dining options. Check your dates if you’re coming to the Island in August. Don’t miss the fireworks or a day watching the racing!

Cowes is also home to racing action throughout the summer season, including the Cowes Classics Week, the Panerai Classic Week, Etchells World, Little Britain and the annual Powerboat Race. Cowes is also the starting point for the Round The Island Race and the Fastnet Race. See our events pages for full listings.

Get the little ones in the Christmas spirit this year by meeting Santa at the Isle of Wight Steam Railway. Board one of the historic steam trains at Havenstreet for an

Get the little ones in the Christmas spirit this year by meeting Santa at the Isle of Wight Steam Railway.

Board one of the historic steam trains at Havenstreet for an atmospheric ride through wintery woodland inside our heated and beautifully restored carriages. Feel like you’re travelling in style as you and your family will have your own compartment for your exclusive use, meaning pre-booking is absolutely essential.

Listen to the evocative sound of steam locomotives as you settle back for the 10 mile round trip.

To book tickets and view the train timetable, visit www.iwsteamrailway.co.uk/events/santa-specials/