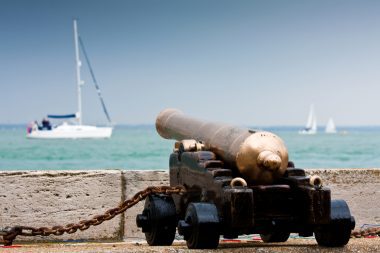 Cowes Beach is a short pebble and shell covered beach to the West of the centre of Cowes along the Esplanade. A perfect vantage point for the many sailing events that take place in the historic yachting town of Cowes throughout the year, including the world’s largest sailing regatta “Cowes Week”. Although the beach is mainly pebbles some sand can be found underfoot below the low water mark and it is a great place for hunting for shells, sea glass and other sea-jewels amongst the pebbles. At the Cowes end of the beach, there is a small park behind the beach where many people prefer to sit and enjoy a picnic or sunbathe between swims. The Royal Yacht Squadron at the East of Cowes Beach forms part of the former Cowes Castle, one of Henry VIII’s defence forts. In the evening the beach is a great place to see the lights of Southampton and passing ships which have a still beauty as they pass in the night. Cowes Beach currently holds a Seaside Award.

There are public toilets available near the grassy area and an ice cream parlour on the front serving refreshments and snacks. The beach is but a short stroll from the busy town of Cowes where you can find an abundance of shops, cafes and bars. There is parking along the seafront and in neighbouring streets. A car park on the outskirts of Cowes is also an option There are public toilets behind the beach front. There are restrictions in place on the Isle of Wight’s main resort beaches between 1st May and 30th Septemberwhich prevents dogs being allowed to use them. However, outside of this season dogs are welcomed as with any of the other beaches.