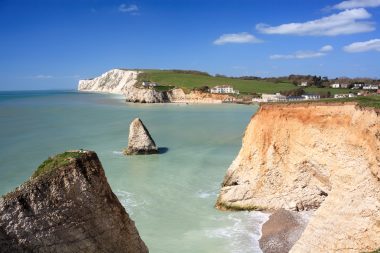 Freshwater Bay Golf Club is perched high above its famous white cliffs, and is one of the most spectacular courses in the UK. This impressive landscape has attracted artists for many years, and the Bay was home to Alfred Lord Tennyson, who wrote much of his work here. The pioneering photographer Julia Margaret Cameron attracted many members of Victorian Society to the Island. Her home, Dimbola Lodge, now preserves and exhibits much of her work. A visit to the Needles Park is a must, take a chairlift down the cliffs onto the beach, build a sand bottle and enjoy the fairground rides nearby is The Needles Old Battery a Victorian coastal defence with a tunnel through the cliffs leading to a spectacular view out to sea.

Freshwater is the birthplace of noted scientist and architect Robert Hooke the inventor of the iris diaphragm in cameras, the universal joint used in motor vehicles and the originator of the word ‘cell’ in biology! Afton Down was the site of the 1970 Isle of Wight Festival . A statue of Jimi Hendrix outside Dimbola Lodge in Freshwater commemorates the event.