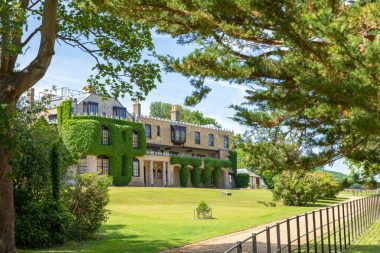 From 1853 until his death in 1892, Farringford was the main home of the renowned Victorian poet Alfred, Lord Tennyson. In this secluded spot on the Isle of Wight, the new Poet Laureate and his family sought a retreat from the clamour of London life. But while Farringford provided a tranquil domestic haven, it also attracted many of Tennyson’s eminent friends, becoming a focus of intellectual and artistic activity.

It remained the family home for successive generations, before eventually becoming a hotel in 1945. More than half a century later, the main house has been restored and redecorated in a late 19th-century style that reflects the Tennysons’ tastes, interests and lifestyle.

Outside, the estate is being returned to its original informal planting scheme, as Tennyson put it himself,‘careless ordered’, including an enchanting walled garden where flowers grow in profusion, as portrayed in Helen Allingham’s watercolours. Here, the Tennysons were often to be seen organising the beds, digging, and planting seedlings.

Discover some of the secrets revealed, and the obstacles overcome, in the five years taken to restore Tennyson’s family home in the Restoration Exhibition.

Elsewhere, visitors can explore the copse with its enchanting woodland perennials, and enjoy a walk around the recreated historic parkland, which affords lovely views of the house, and of High Down, its rounded upstanding ridge referenced in Tennyson’s poem,“To the Rev. F. D. Maurice.”

PLEASE NOTE: There is no need to book for the gardens. Enter via the ticket office.