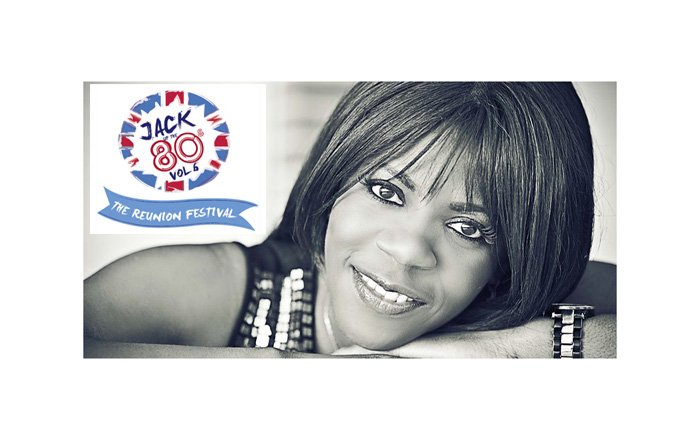 JAKI SET TO JACK UP THE 80s!
British Soul star Jaki Graham is the latest name to be added to what’s shaping up to be another crowd-pleasing line-up for next Summer’s Jack Up The 80s festival, which takes
place on 11th and 12th August.
Jaki has enjoyed chart success for more than 30 years with hits such as Could It Be I’m Falling In Love a duet with David Grant in 1985, Set Me Free, Round and Round, and a version of Chaka Khan’s Ain’t Nobody, which topped the USA Billboard dance charts for five weeks in the early 1990s.
A highly-acclaimed performer, Jaki is renowned for putting on a great live set and loves the Isle of Wight having holidayed here many times.
Organisers said “We’re really excited to welcome Jaki to our festival, she’s someone who’s had a string of hits, she was a real trailblazer on the London soul scene and a regular on Top of the Pops in the 1980s. Jaki will be performing with a great live band and is guaranteed to delight audience members of all ages.”
Now in its sixth year, this will be the festival’s second year at its new home Smallbrook Stadium in Ryde.
Owing to the success of the event earlier this year which saw sell-out crowds, 2018 tickets will be strictly limited.
Mainstream Early Bird tickets go on sale on Monday 22nd January and will be available to purchase from jackupthe80s.co.uk. A limited number will also available at over the counter
from outlets on the Isle of Wight.

The earlier you buy the greater the saving!

HAPPY CHRISTMAS & BEST WISHES FOR 2018 EVERYONE! Next