Animal Encounter Things to do
Add to wishlist
Share this 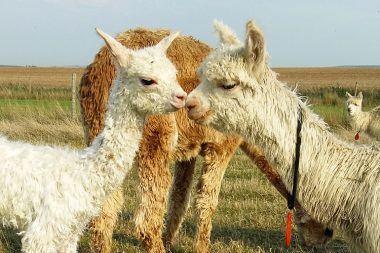 West Wight Alpacas was set up by husband and wife team, Neil and Michelle Payne in 2010. What started out as a hobby quickly turned into an active family business and a high quality tourist attraction as well as one of the leading Suri Alpaca and Llama stud farms in the country. They were impressed by Suri alpacas and their friendly inquisitive nature, and also the lovely part Argentine Wooly llamas we have imported from Europe. They then developed the idea for alpaca and llama walking and bloodstock breeding on the Isle of Wight.

Originally, they purchased eleven alpacas (five of which were pregnant) and decided to specialise in the more niche natural coloured Suris. They also bought and developed the existing farm site in the village of Wellow, in West Wight, which is now home to around 60 alpacas, 13 llamas and many other animals.

Robin Hill will be open during the daytime this October half term! From 17th –

Robin Hill will be open during the daytime this October half term!
From 17th – 31st October, the park’s 88 acres will be open daily from 10am – 5pm so you can enjoy your favourite outdoor rides and attractions this autumn.
AUTUMN EVENINGS
As well as daytime opening, on six exclusive dates (21st, 22nd, 23rd, 28th, 29th & 30th), the park will stay open into the evening until 9pm. Soak up the atmosphere of the illuminated woodland, brought to life with unique entertainment including a DJ and live band across two stages, street performers and soloists…with their Woodland Pond Bar open and food served until late.
Admission for the Autumn Evenings is exclusively available to ticket holders who book for those dates. Free return admission will not be permitted. FVP holders will need to pre-book these dates to guarantee entry.
They do anticipate their Autumn Evenings to sell quickly so advise booking as early as possible to avoid disappointment.

Take a trip to The Isle of Wight Zoo half term for Halloween antics and seasonal fayre. They have something for everyone and prizes to be won! WIN a Family Membership

Take a trip to The Isle of Wight Zoo half term for Halloween antics and seasonal fayre. They have something for everyone and prizes to be won!

The little ghosts and ghouls amongst you are also invited to complete our Spzooky quiz trail for the chance to get your sweet treat. Then why not head down to their farm and take part in some not so Spzooky animal encounters!

Whilst you are there why not treat yourself so some fantastic seasonal food in the Wildheart Café where you can enjoy 15% OFF for the whole half term!

Book your visit to avoid disappointment – tickets are still capped and COVID secure measures are being taken.

Why not scare yourself silly by joining them on an interactive ghost walk. Restless Isle will be terrifying you with ghost stories and hunting for ghosts with their professional ghost hunting equipment. The ghost walks will be on for 2 nights only: 24th & 31st OCTOBER. Limited tickets are available. For more information on our ghost walks click here.

Looking for a fun day out with the kids this October Half Term? Rocket and the rest of his pals would love to

Looking for a fun day out with the kids this October Half Term? Rocket and the rest of his pals would love to see you all this half term.
So please help support this rescue sanctuary and help enrich the lives of these little guys…they love having visitors! They hope to see you all soon for some Halloween fun.
Monkey Haven have some spooky fun for boys and ghouls including a Halloween-themed treat trail with 10 mini pumpkins hidden around the park! You’ll be bats to miss out!
Take a picnic or try out the spooktacular milkshakes and little monster treats in the on-site tea room.
For tickets visit www.monkeyhaven.digitickets.co.uk

The spooky family-friendly festivities will run throughout October half term, on the lead up to Halloween from 19th – 23rd & 26th – 31st October!

The spooky family-friendly festivities will run throughout October half term, on the lead up to Halloween from 19th – 23rd & 26th – 31st October! So, what are you waiting for? Put on that witch’s hat, pick up your broomstick and grab your tickets online now to join your favourite characters from 11am – 3pm!
Blackgang Chine’s ghostly characters are yet again causing mischief in Rumpus Mansion with their LIVE performance this October. After braving the Mansion, head up past the Hall of Mirrors to dance away the cobwebs at the spooky disco and keep your eyes peeled for a whole host of gremlins – can you spot them all? Enjoy an array of spooky activities, games, competitions and the chance to meet Cedric the Dragon alongside our very own Fairy Queen!
Don’t forget to come in your best fancy dress too – there’ll be a daily competition!
Please note that all visits to the park should be booked online in advance to guarantee entry on your chosen day.