Notice the plaque commemorating the Channel Airways Dakota that crashed here in fog in 1962. Turn right out of the car park and follow the road to the entrance gates for the National Air Traffic Services (NATS), which was the location of RAF Ventnor. Notice a number of Second World War brick structures opposite the station.

Walk along the road by the NATS fence for 10yds (10m), and then cross over to the grass on the other side of the road by a water trough on the left. Turn right and follow this path until it divides, then take the left fork. After 65yds (60m) take the faint path through the bracken on the right, heading past a solitary tree and crossing a track before passing through gorse-covered Bronze Age burial mounds. Continue on this path, which bears right, and you will reach the highest car park on the Isle of Wight, with stunning views across the south and east of the island.

Go straight across the car park to reach a signpost after 90yds (85m), and head rightwards towards the corner of the fencing surrounding the former radar station, where you will find another kissing gate at the corner of the NATS fence. Go through the gate and follow the path that runs along the NATS fence, until reaching a tall mast and another kissing gate, which you go through.

Turn downhill and go 40yds (40m) downhill and through another kissing gate where there is a viewpoint bench. Carry on downhill for about 190yds (175m), following the zig zag track into the bottom of the coombe. As the bottom you will see the brick stacks and remains of a rifle range and pistol butts.

Carry on into and along the coombe, keeping to the right. About 110yds (100m) before the trees at the far end the path divides. Take the path to the right and shortly left as it keeps very close to a wire fence on the left.

To your right you will see a brick cave which is the remains of the ammunition store. Follow this path next to the wire fence, through the kissing gate and down steps to the road. Pass through a gate and turn left and left again into the Industrial Estate.

About 30yds (30m) on the left there is a blue plaque outside the Coastguard Rescue Station marking the former site of Ventnor railway station. With your back to the plaque you are looking at the Terminus Hotel on the corner to the right, which has been converted into flats.

Just behind the Terminus Hotel building there is a steep flight of stone steps leading upwards and take this up to a kissing gate at the base of the hill. Then continue up the steep slope of St. Boniface Down, eventually through another kissing gate, until you reach the mast. This is a very steep path.

Turn left at the top and follow the path to the immediate left of the wire fence to return to the car park by the Dakota plaque. 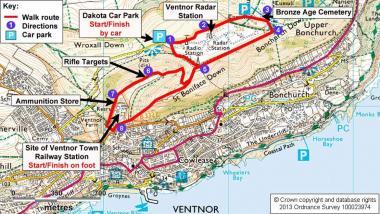