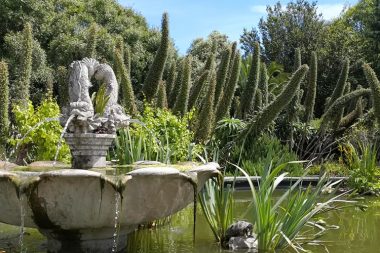 Ventnor Botanic Garden lies in the remarkable microclimate at the heart of the famous ‘Undercliff.’ This unique garden is protected from the cold northerly winds by chalk downs. Indeed, it holds the warmth from its southerly aspect so well that, combined with the moderating influence of the sea, frost is rarely known. When frost does occur it is usually of short duration and not great severity. With an average rainfall of 28 inches, its climate is more akin to the Mediterranean. This enables a wide variety of plants considered too tender for much of mainland Britain to be grown. The Garden is unrivalled for its collections of subtropical plants grown unprotected out of doors. “Nestling in the microclimate of The Undercliff, Ventnor Botanic Garden on the Isle of Wight has a subtropical and exotic plant collection unrivalled elsewhere in the UK.

Plants which would normally be found in protected glasshouses thrive and naturalise in geographical plantings based on the Mediterranean zones of the world. The site of the Garden was formerly the Royal National Hospital for Diseases of the Chest. Founded in 1868 by the inspiration of Dr Arthur Hill Hassall, physician and naturalist, it grew within a decade to be an important institution. For 80 years it was a major factor in the life of Ventnor. With the discovery of antibiotics for tuberculosis the hospital quickly became redundant and soon deteriorated beyond economic repair. It was finally demolished in 1969. Ventnor Botanic Garden’s earliest incarnation, in 1970 as the Steephill Pleasure Gardens, was based on the original layout of the Victorian grounds, with its backbone of mature specimen Thuja, Evergreen Oak and Cupressus. The historically important plantings of Chusan Palm remain the only true garden feature from the Victorian age. The true potential of the site was recognised by the late Sir Harold Hillier, the internationally famous plantsman of Winchester. Bolstering the 22-acre site with tender plants from his nurseries, the task of building a new garden was undertaken with a subtropical theme. The limiting factors of the site, shallow alkaline soil and salt-laden winds from the south and west were dealt with by a careful selection of plants and extensive windbreaks. Within two years the plantings had created enough interest for the new Garden to be officially opened and for the alteration of the name to Ventnor Botanic Garden. On 21st June 1972 His Excellency Earl Mountbatten, then Governor of the Island, performed the opening ceremony. A fruitful decade of planting then commenced, which led to the international recognition of the Garden.