Facing the quarry, take the left-hand path out of the car park. After 45 yards (40m) turn right and climb the steps by a wooden bench, signposted T27. The steep upward path continues through a kissing gate to the top of the hill.

By the Tennyson Monument turn right and follow any of the cliff-top paths, aiming for the aerial mast visible on the skyline to the far west. Cross one stile in the middle and a gate towards the end. Skirt the right boundary of the aerial building then head diagonally left and downwards to a concrete road, by the corner of the Coastguard Station. Cross over and follow the signs to the Needles viewpoint.

Return to the road, turn left and climb the steps on the left just beyond the Coastguard Station and before the New Battery. Follow the path down to the Needles Old Battery, then the tarmac road towards Alum Bay.

At the corner where the road bends sharply left towards Needles Park, go straight ahead, signposted T25, and climb a few steps then go through a kissing gate. Keep to the path along the lower boundary of the slope, with fence on the left, passing the farm, until it starts to rise. Follow the track diagonally upwards to a beacon. Go through the gate and take the rutted path T24 gently downhill on the left, returning to the car park after a gate.

For the longer walk, follow the outward track from the car park but go straight on following signposted footpath T24 instead of turning right to climb the hill. Pass through a kissing gate and follow the path at the bottom edge of the trees, ignoring two footpaths on the left and a rising path branching right.

At a four-way junction by a marker post and close to a National Trust omega sign, turn 90 degrees left through a gate and down the bridleway. Notice “Tennyson’s Bridge” 30 yds (30m) to the left, but turn right at the T-junction and go along the path, with golf course and glimpses of Farringford on the left.

At the gate onto the road, turn right towards Freshwater Bay, and pass the thatched church of St Agnes.

Just after Dimbola Lodge, turn right through a gate into a field and go straight up the hill, not deviating to the right, and go through the gate on the skyline. Bear gently right and carry on uphill until the Tennyson Monument is reached. Turn right and head to the gap in the trees and retrace your steps down the steep path back to the car park. 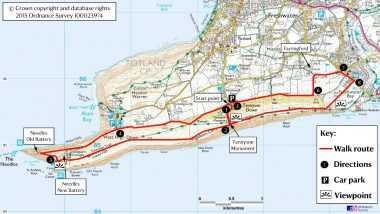 Walk devised by The National Trust