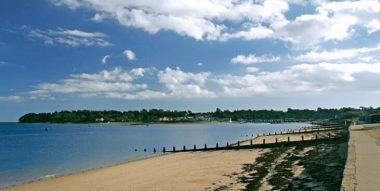 Bembridge and has some magnificent views over the busy harbour. St Helens has it’s own beach where you will find the remains of the original church which was built on the seafront but later relocated to a safer position, just off the coast is the St Helens Fort built around 1867 to ward off French invaders and the village has a rich history of maritime use through out the century’s., The village host a number of events through out the year including a village fair, sports day and carnival and is welcoming to holiday makers and locals alike. There are a number of good restaurants in the village as well as some pubs and cafes down by the beach. Holidays in St Helens are very popular leading to there being three holiday parks offering caravan and chalets accommodation as well as camping and touring. For those looking for a self catering holiday in St Helens there are a number of places available both in and around the village.