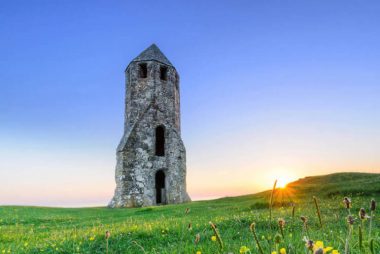 St. Catherine’s Oratory is a medieval lighthouse on St. Catherine’s Down, above the southern coast of the Isle of Wight. It was built by Lord of Chale Walter de Godeton as an act of penance for plundering wine from the wreck of St. Marie of Bayonne in Chale Bay on 20 April 1313. Affectionately known as the Pepperpot, it seems to have been used as a lighthouse, and stands on one of the highest parts of the Isle of Wight. It is part of the Tennyson Heritage Coast, a series of linked cliff-top monuments. A later lighthouse can be seen nearby.