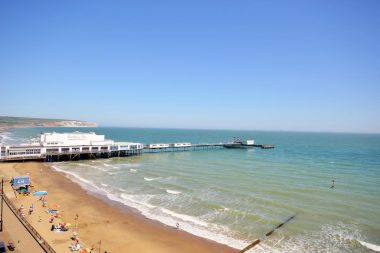 Sandown is a seaside resort and civil parish on the south-east shore of the Isle of Wight, with the retreat of Shanklin to the south and the settlement of Lake in between.

The town’s mid year jamboree has been engaging guests since 1889. The present coordinators put on a progression of occasions including the mainstream Children’s Carnival and Illuminated Carnival, just as New Year’s Day Celebrations with amusement and firecrackers.

Close by are Sandown Levels in the flood plain of the River Yar, one of only a handful not many freshwater wetlands on the Isle of Wight, where Alverstone Mead Local Nature Reserve is well known for birdwatching. Sandown Meadows Nature Reserve, gained by the Hampshire and Isle of Wight Wildlife Trust in 2012, is a spot to spot kingfishers and water voles. Further inland, Borthwood Copse provides brilliant forest strolls, with bluebells aplenty in the Spring.