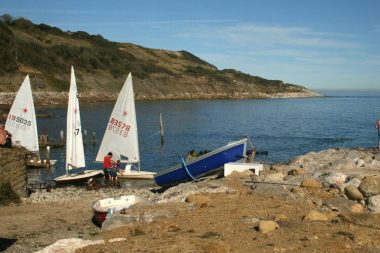 Reeth Bay, Niton, Ventnor, Isle of Wight Reeth Bay is a small curved bay on the southernmost tip of the Isle of Wight, England.

It lies to the south of the village of Niton. It faces south out into the English Channel and lies to the east of St. Catherine’s Point lighthouse. It is at the centre of a small hamlet called Castlehaven where there is a concrete ramp for launching small craft. There is a small cafe at the southerly end of the bay. The beach is predominantly sand and pebbles. The sea bed is a mixture of rocks and mud. The bay is best accessed from the road from Niton that leads down to the bay.