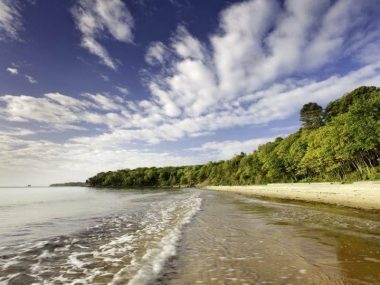 Priory Bay is a small privately owned bay on the northeast coast of the Isle of Wight. It lies to the east of the village of Nettlestone and looks out to Selsey Bill and its shoreline is approximately 600m in length, which has golden sand and woodland behind. The northern part of the bay has a straight coastline and is sandy with some pebbles.

At the southern end the bay curves round to the east. Here the coast is rocky with evidence of walls and buttresses that were built to protect the coastline. The bay is surrounded by woodland known as Priory Woods owned by the National Trust. The sea bottom is predominantly sandy. A shallow sandbank called Gull Bank exists just offshore which keeps a long thin pool of water next to the beach at low tide. Beyond the bank, the bottom is gently shelving. The bay can be accessed by walking round Horestone Point from Seagrove Bay Thanks to the Daily Mail and Priory Bay for the use of their pictures.