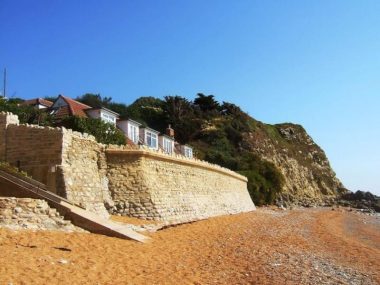 Orchard bay is a picturesque cove that is positioned on the coastal walk from Ventnor to St. Catherine’s light house.  The cove itself is overlooked by a stunning beachfront property called Orchard House, which was originally built in 1828.  The house in 2002 was also at the centre of a £90 million drug smuggling operation which made Worldwide news and saw the perpetrators jailed for 26 years.

The cove itself is only approachable by foot or by boat.  The best place to park is at The Botanic Gardens and then head for the coastal path, once there, head south.  It won’t take more than about 10 minutes on foot. The beach is of sand and a dark terracotta pea shingle and there are rocks and pools to explore as well as clear waters.