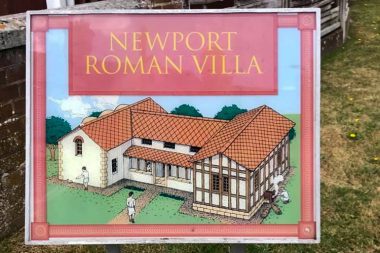 Newport Roman Villa is a 1,700 year old farmhouse and a Scheduled Ancient Monument in the care of the  Isle of Wight Council Heritage Service.

Discovered in 1926 when the owner of a nearby house dug foundations for a garage, subsequent excavations revealed extensive remains of a late Romano-British farmhouse built around 280 AD. The well-preserved remains at Newport Roman Villa provide a fascinating insight into country life in third century Britain. The Villa has a superb bath suite with, under floor heating and remnants of mosaic floors. Sections of the Villa have been reconstructed to illustrate the building materials used; you can peep into a Roman kitchen and see a slave preparing a Roman feast. The villa has a hands-on activity room where you can make a mosaic, repair a broken pot or weave a blanket. Discover the plants Romans would have used in the beautiful herb garden.