Luccombe and The Landslip Walk – 5.6 Miles 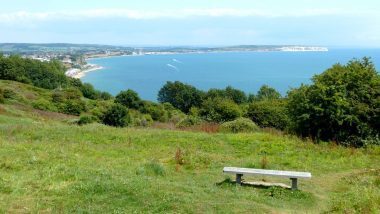 From the Dakota Memorial interpretation panel at the back of the car park, follow the path to the left, around the perimeter of Ventnor Radar Station, keeping the fence on your left. Turn left at the kissing gate by a tall mast, signposted V122 Boniface Down. This is one of the many gates to keep the goats in their enclosure. Keeping the radar station perimeter fence on your left, take the path which follows the hillside in a north-east direction, parallel to the coast. At the end of the green radar fence, go through the first kissing gate and head diagonally uphill towards a signpost on the near horizon, signed. At this signpost, turn left (V113 Luccombe Copse) and reach a seat after 200yds (180m) from which to admire the view.

Backtrack for 20yds (20m) and take the path on the left which heads gently downhill along a ridge. Start to descend more steeply and pass through trees. Go through the memorial gate by the interpretation panel and go down the steep and grassy Nansen Hill to the gate onto the main road.

Cross the road and take path V65 towards the back right of the car park by the interpretation panel. When you reach a wall turn right. Do not descend, but keep to the immediate right of the wall and bearing left at a fork. The path crosses the lower end of the Smugglers Haven tea-rooms, then returns to the wall. Follow the wall past a low-roofed stone shelter, then take the steep steps downwards through the Devils Chimney, a narrow cleft in the cliff. Bear right and continue down two more flights of steps to the remains of a seat. Bear left and up four steps then down many more to reach the coastal path. Handrails are provided where the steps are steepest.

Bear left and follow the twisty path through The Landslip, following the coastal path signs where there is a fork. At the end of a narrow walled path you reach Rosecliff Lodge. Carry straight on the track, ignoring all left turns, and follow the coastal path for 0.6 miles (1km) past a few houses in Luccombe, eventually reaching a tarmac road after going through a garden and a gate and passing more houses.

In 65yds (60m) after the white house turn right and cross the stile to walk through Haddon’s Pits. Follow a meandering path parallel to the road through this open area, rejoining the road at the stile at the top left corner. Turn right and follow the road downwards towards Shanklin. Turn left into Priory Road opposite a large white block of apartments.

After 165yds (150m) take footpath SS91 on the left into Vaughan Way. Follow the road into the estate, and on a left hand bend follow the grassy and then stone track to its end at the main road. Cross the main road with care and pass through the lych gate of St Blasius church signposted SS10. Take the tarmac path to the left of the church and cross over the boundary wall. Continue over two fields and three memorial gates to reach some trees, climbing all the time, more steeply and with some steps past Holme Copse. Go through two more memorial gates into a meadow.

Turn sharp left keeping the fence on your left, pass through a gap at the lower end of the crossing fence and then head diagonally right up the hill to the trig point. There are fine views along the whole length of the island from from Tennyson Down to Culver Down. Continue onwards crossing a stile and a memorial gate in the hedge in front.

Turn left onto the crossing track, and pass through two gates to reach the Luccombe Down interpretation panel. Follow the wide ridge-top track. Shortly after the radar station comes into sight take the track which sweeps around to the right in that direction. The track eventually becomes a well-worn grassy path on the down, close to the road leading to the radar station. Continue to follow this path parallel to the road back to the car park at the end of the perimeter fence. 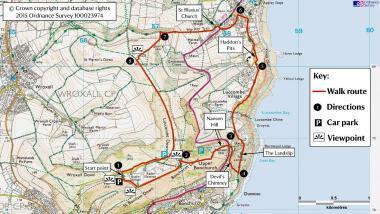