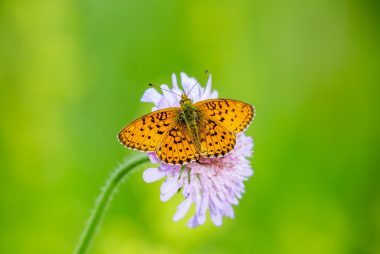 Great walk for finding Adonis blue and chalkhill blue butterflies, with large populations of small blue, dark-green fritillary and Glanville fritillary. Brown argus and grayling can also be spotted, and in late summer glimpses of the clouded yellow.

Cross the road, turn right on the road verge until you see a diagonal rising chalky path on the right-hand side, signed bridleway F34. Take this path until you reach a track at the top, where you turn right (eastwards) through the golf course, and a gate, until you descend steeply (look out for dark green fritillary in cut gorse areas in July.)

Twenty yards after a “No entry for vehicles” sign, and just after a track joining from right, turn sharp left and round up into Brook Down quarry to explore the quarry slopes and gorse glades. (Grizzled skippers.)

Head back to cross the main track and bear left just before the “No entry for vehicles” sign. Follow grassy track upwards. (Adonis blues.) Bear right at the hill crest by cattle pens, then bear to the right of two gateposts marking track down the hill.

Follow one of the lower cattle tracks/teracettes parallel to the track. Aim just to the right of a line of bushes at the base of the hill in the distance, or the main road beyond. Follow this low level and narrow path as far as Compton Combe, keeping on the downs side of the fence line. (Clouded yellows).

Compton Coombe, above Compton Farm, is an Isle of Wight butterfly hot-spot. Climb up the combe and leave at the top right, about three quarters of the hill height. Take a level path around the head of the combe, through gorse to a five-bar gate in the fence into an un-grazed section. Continue along the now well-defined grassy track, which eventually descends to the car park (graylings, green hairstreaks and small blues).

During the Glanville fritillary season (June to early August), take a detour to Compton Chine via the road verge or the coast path from the car park. 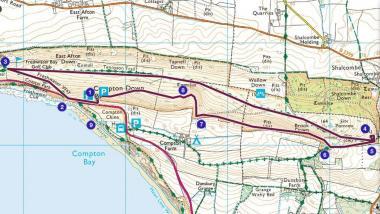