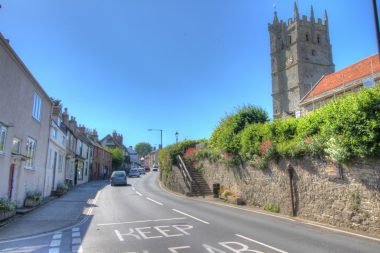 Carisbrooke is a village on the south western outskirts of Newport, Isle of Wight and is home to Carisbrooke Castle.

Carisbrooke was for quite a long time the island ‘s capital and was once called Buccombe or Beaucombe, and means the ‘reasonable valley’.

The Governor of Newport once inhabited Landscape House, at the upper piece of Carisbrooke High Street in the Victorian period. Alexander Ross, productive Scottish essayist and controversialist, was vicar of Carisbrooke from 1634 until his passing in 1654.

The site of the old Carisbrooke railway station lies on the grounds of Christ the King College in the lower part of their playing field.

When in 1917 the Royal family changed its name from the ‘House of Saxe-Coburg-Gotha’ to the ‘House of Windsor’ and revoked every single German title, the title of Marquess of Carisbrooke was made for the German Prince Alexander of Battenberg.

The village also has the medieval church of St Mary’s Church (sitting above Carisbrooke High Street with a view to the Castle). It started life as a Benedictine monastery, set up by French priests around 1150. The monastery was dissolved by King Henry V in 1415 during the French Wars. Disregard throughout the hundreds of years incurred significant damage, yet in 1907 the congregation was reestablished to its full greatness. Its most striking component is the fourteenth century tower, ascending in five phases with a turret at one corner and a battlemented and pinnacled crown.

Sitting high and glad at the core of the Isle of Wight, Carisbrooke Castle has been a mounted guns post, ruler’s jail and a regal summer living arrangement. Today it’s the quintessential castle with attractions to see both inside and outside. Experience a broad range of sights with views out across the Island, try and find King Charles I’s bedroom, appreciate the peaceful Princess Beatrice Garden and even meet the well known Carisbrooke Donkeys.