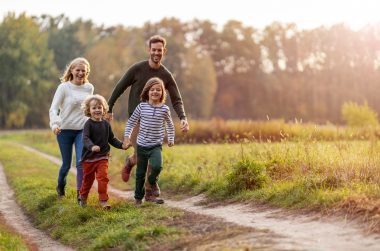 This route follows about eight miles of fairly easy terrain along the south-western cliff tops, with detours inland at each chine, a feature of this coastline. These chines are made by streams running down to the sea and some, such as Whale Chine, are steeper than others and quite impressive.

Blackgang Chine is the site of the oldest theme park in the country, which you do have to walk inland to avoid. Walking along the top of the tall cliff after Blackgang brings stunning views across the southernmost section of the island’s coastline. Look back at Niton Down and you’ll spy the Pepper Pot, a medieval lighthouse, built as penance by a local lord for allegedly looting a wrecked ship of the Pope’s wine, back in 1320.

Leave the Military Road at Grange Chine, walking towards the sea and following the signposts BS58. Walk down into the Chine, then walk across the bridge at the beach and up the other side of the mouth of the chine. Continue along the cliff overlooking Brighstone Bay, to passing Barnes Chine and then the crumbling yellow sandstone of Barnes High.

Continue along the cliff top to Cowleaze Chine and follow the path inland around the head of the chine and walk parallel with the opposite side towards the cliff top again. Cross over a stile, footbridge and another stile and passing the old water works on your right, strike diagonally left across the field to the far corner.

Pass over stile and down the chalk path with rail, then at the top of the steps down to the beach, turn left inland following Shepherds Chine. Halfway up the chine, at the irrigation dam and pumphouse, turn right across the chine and climb to the rim via the steps. At the top turn right and return to the cliff edge.

Continue along the cliff top to Atherfield Point and on to Whale Chine, where you have to turn inland, following the chine to the Military Road. Then turn right, walk through the car park, and at the end turn right again, over a gate, then crossing a field and back to the coastal path.

Skirt around Ladder Chine and continue eastwards around Walpen Chine taking the footpath towards Cliff Farm and the village of Chale, alongside a hedge and now heading inland. Walk over the footbridge between the fields to the stile, keeping the hedge on the right. Turn right along the road past Cliff Farm to the village, passing the church, then turn right along The Terrace then left along Bridleway C15.

The coastal path follows a well-defined track along the cliff top above the undercliff. Continue on the cliff top, above St Catherine’s Point and Rocken End, the most southerly part of the Island.

Pass the Telecom transmitting station and masts and walk along the path with the fence and bushes either side. Cross a stile, continue to the edge of the field, over another stile and conclude this section of the coastal path by descending into Barrack Shute, via Boxers Lane footpath.

Ends at Niton. There are two pubs in the village (Joe’s Bar and The White Lion) and if you turn left down to Niton Undercliff, the Buddle Inn is a good stop off point, and you could continue down to the lighthouse and Rocken End beach.