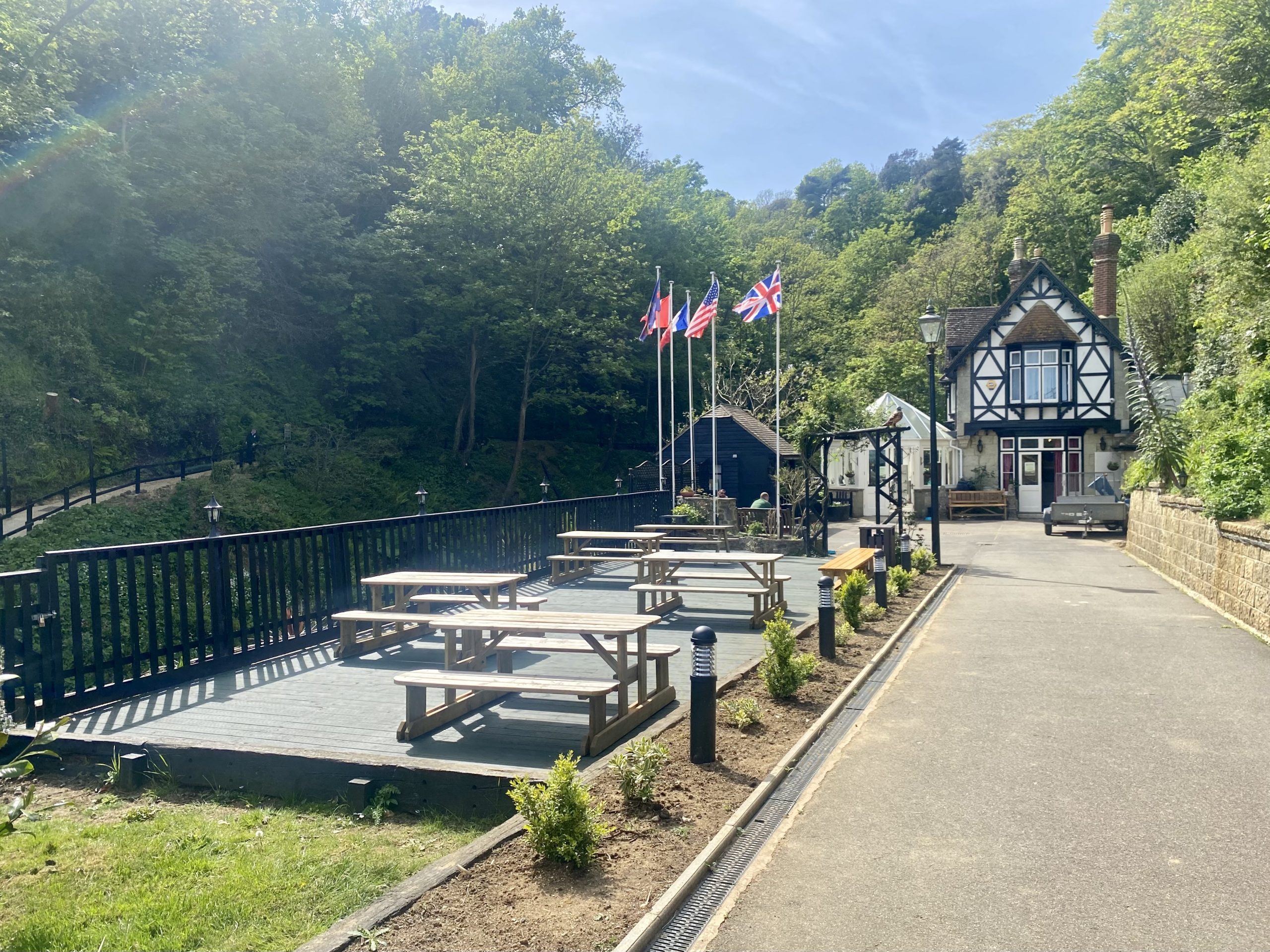 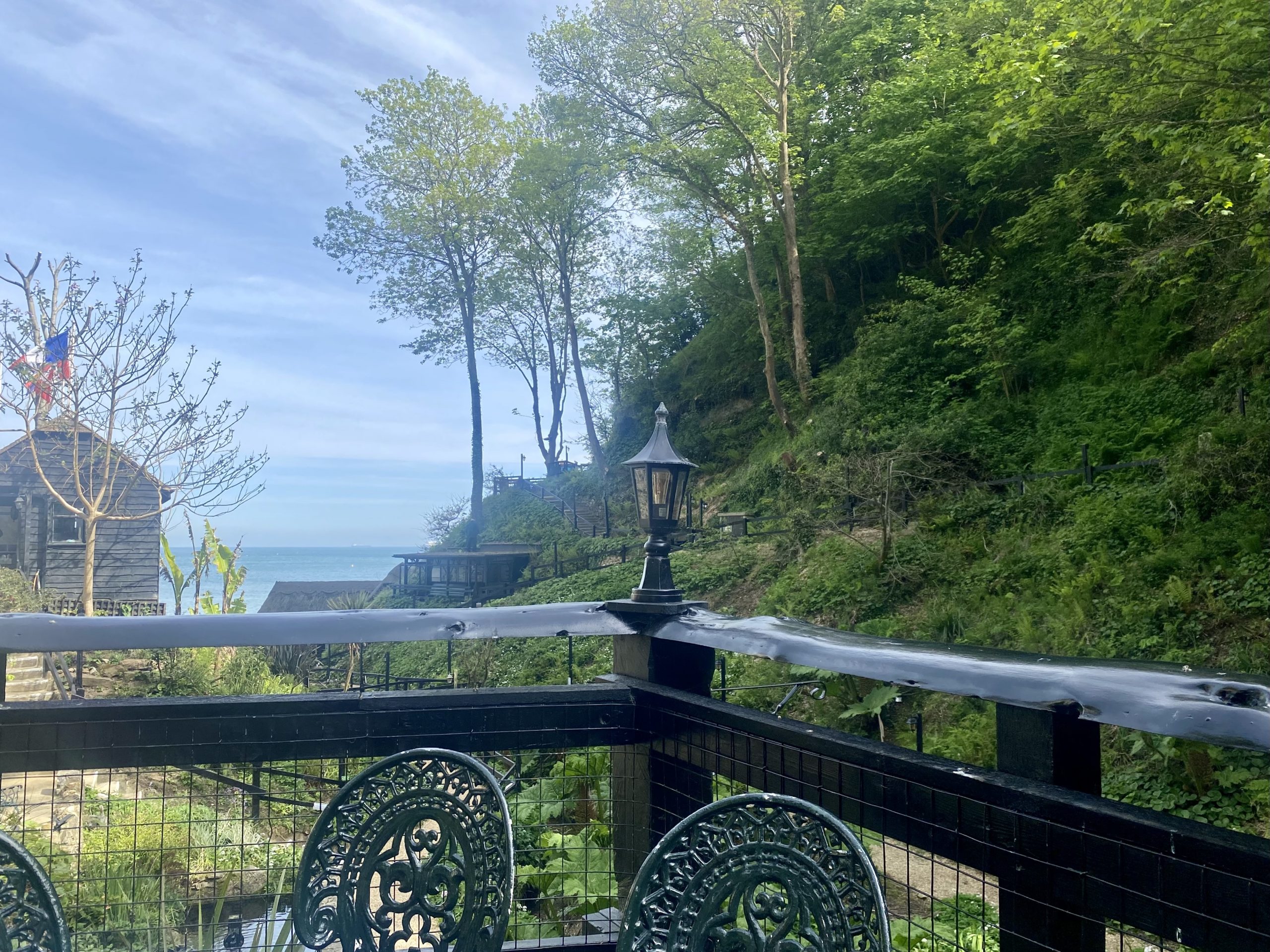 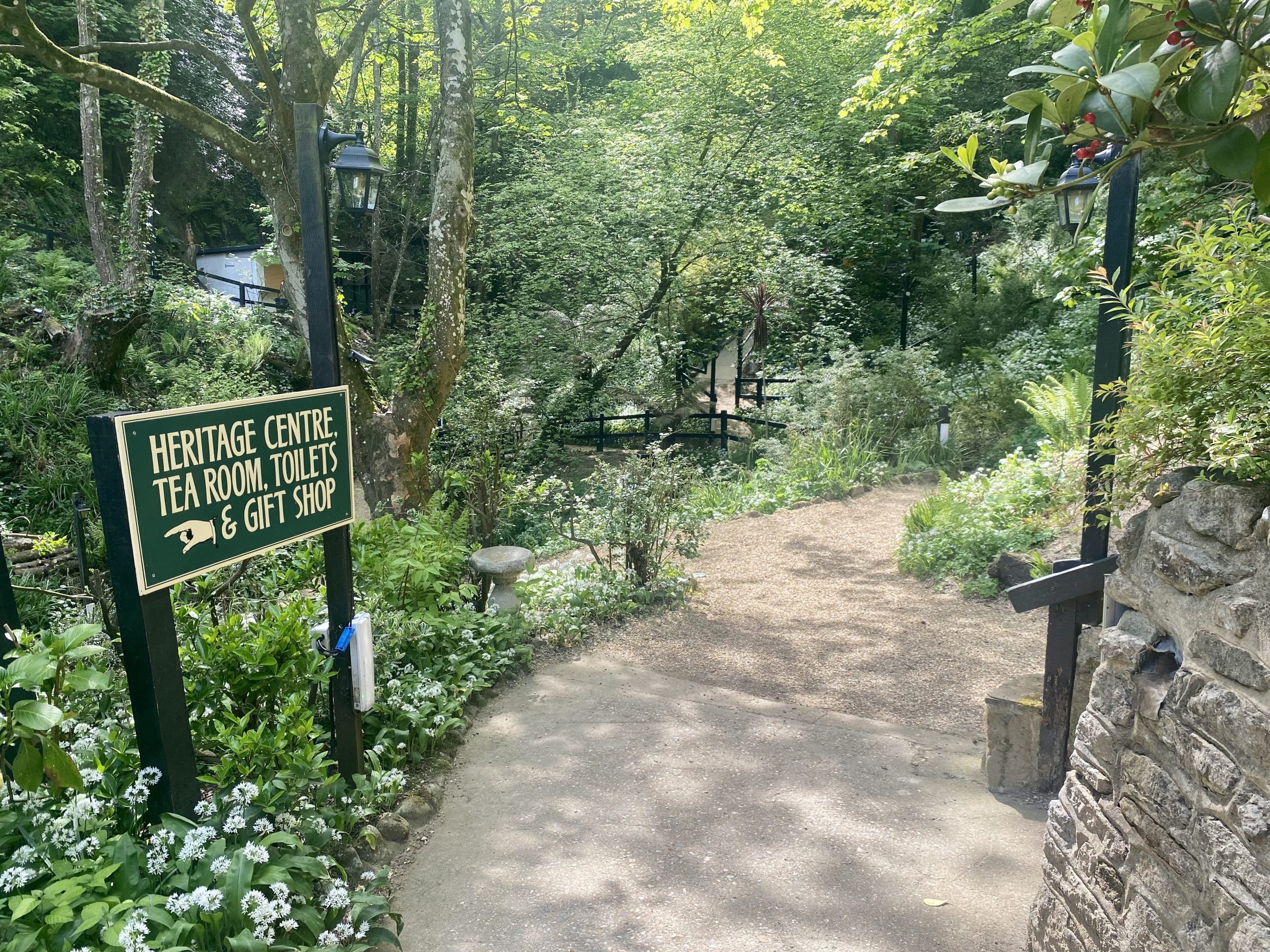 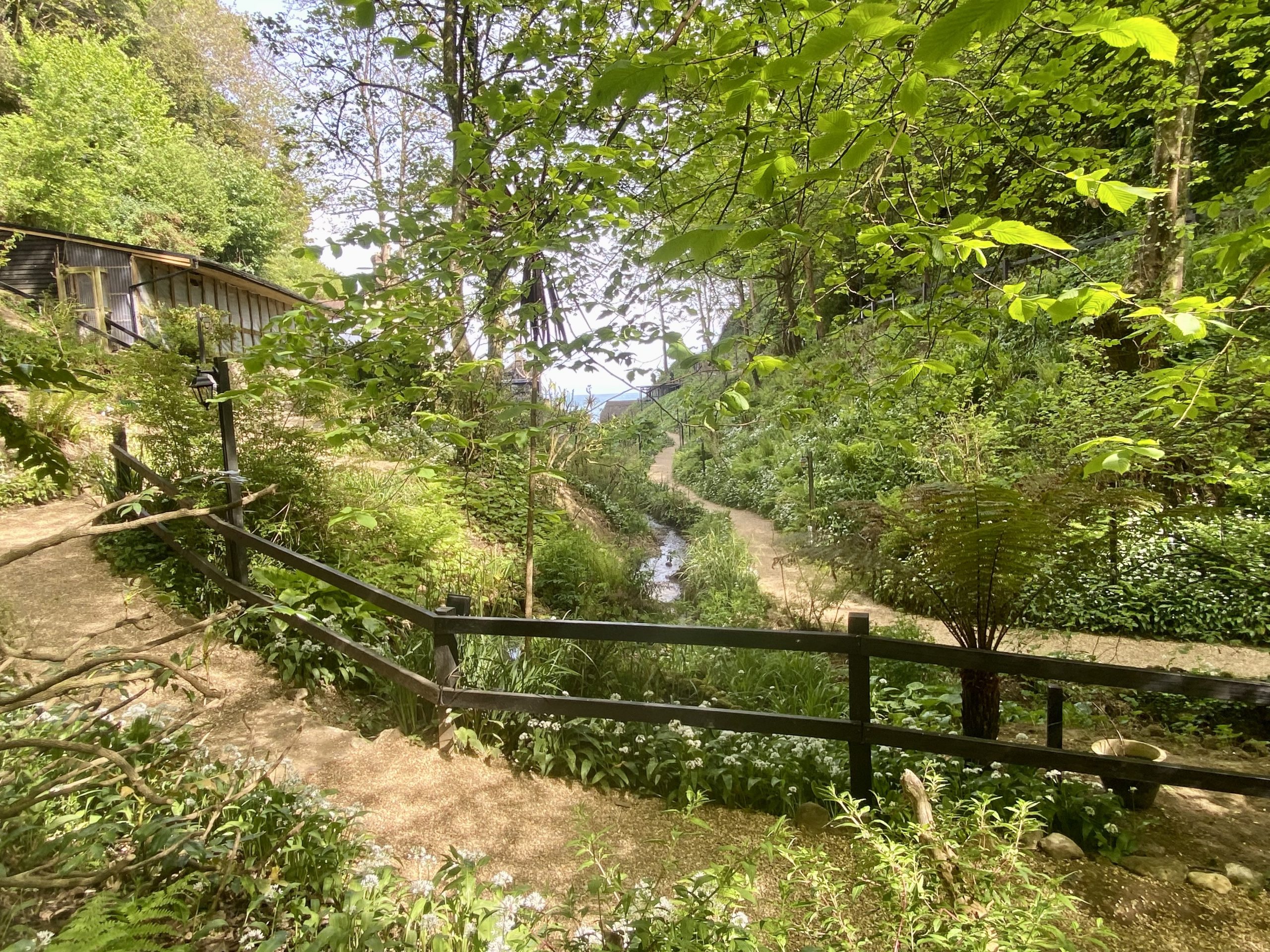 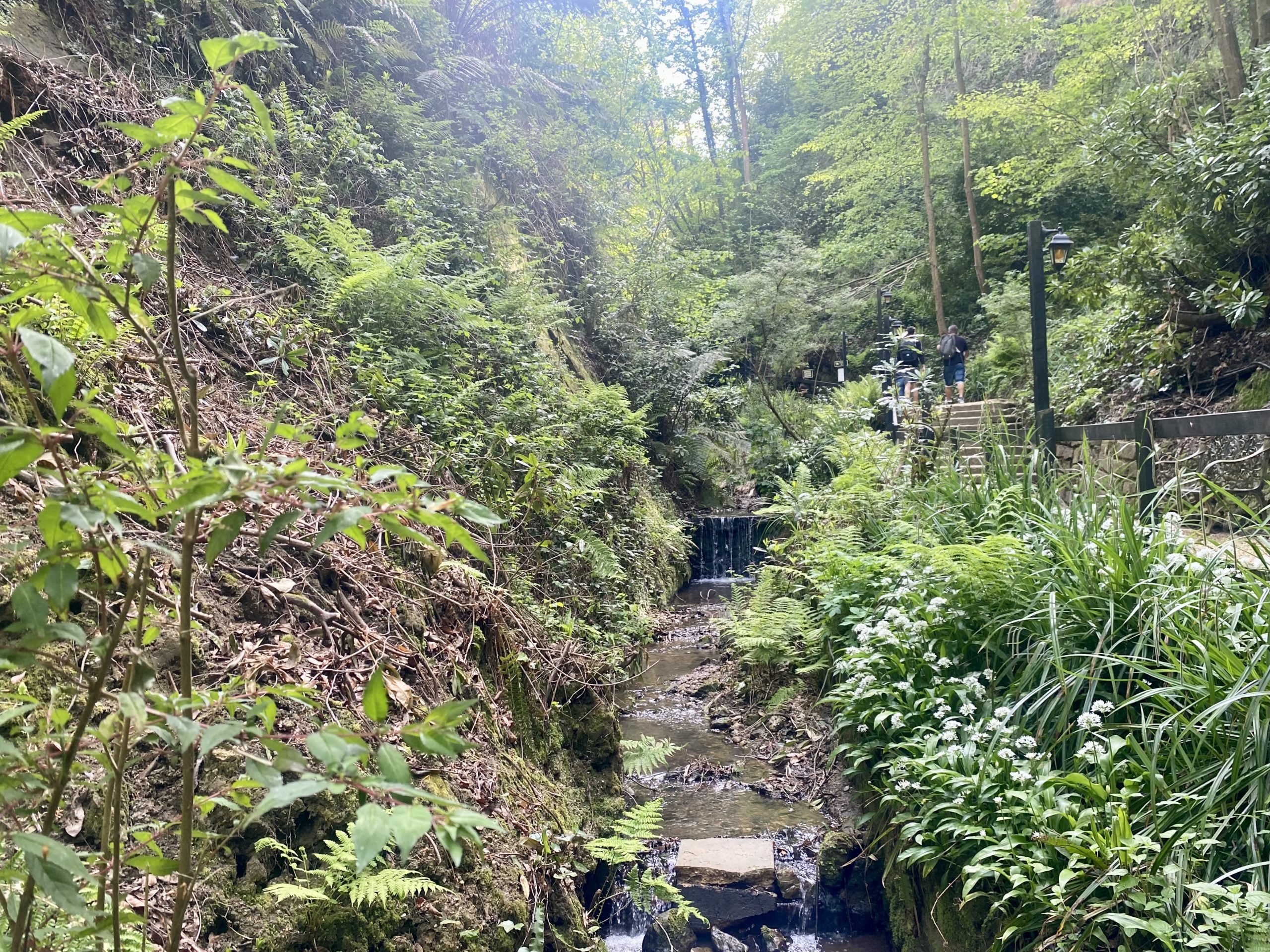 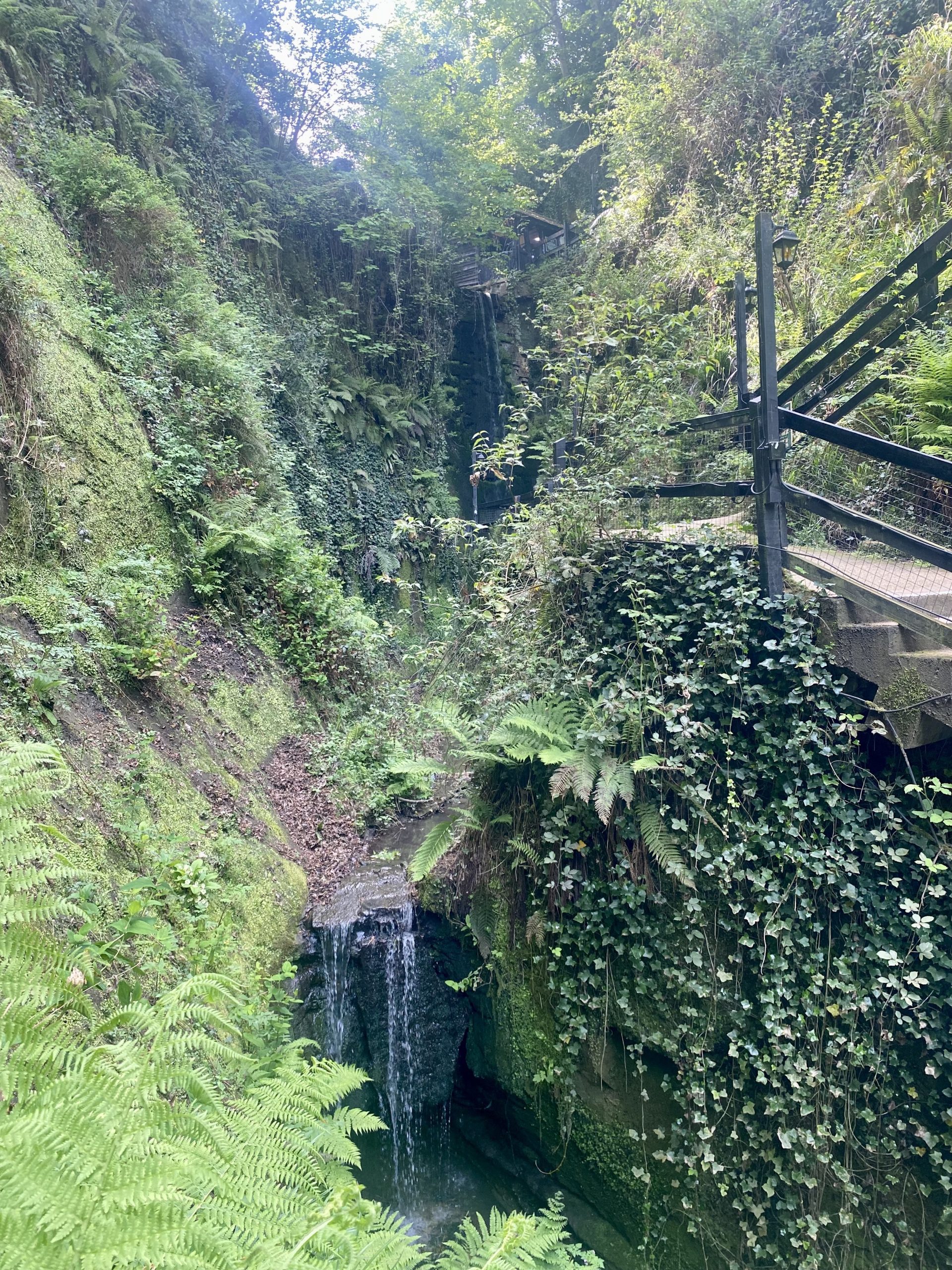 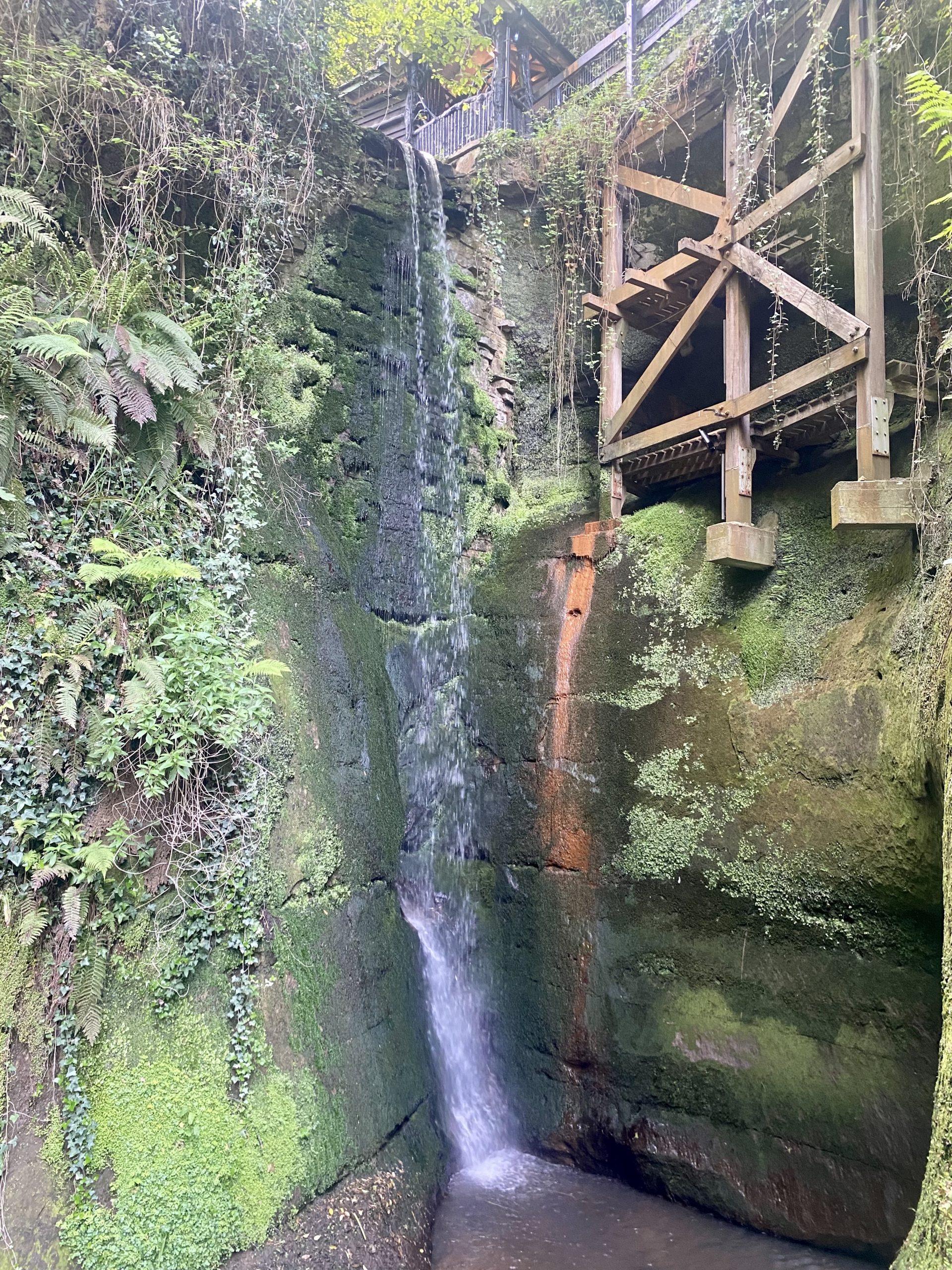 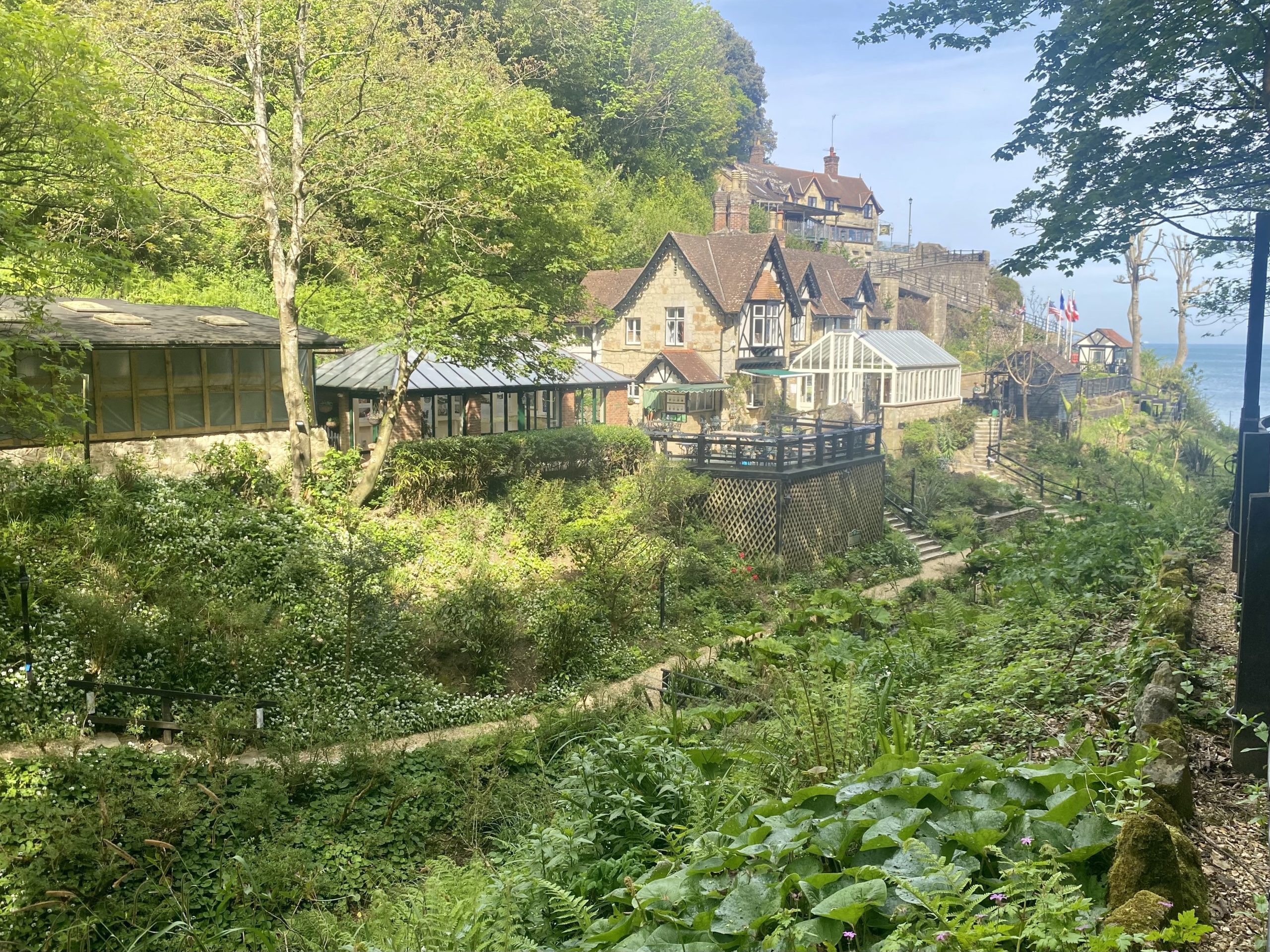 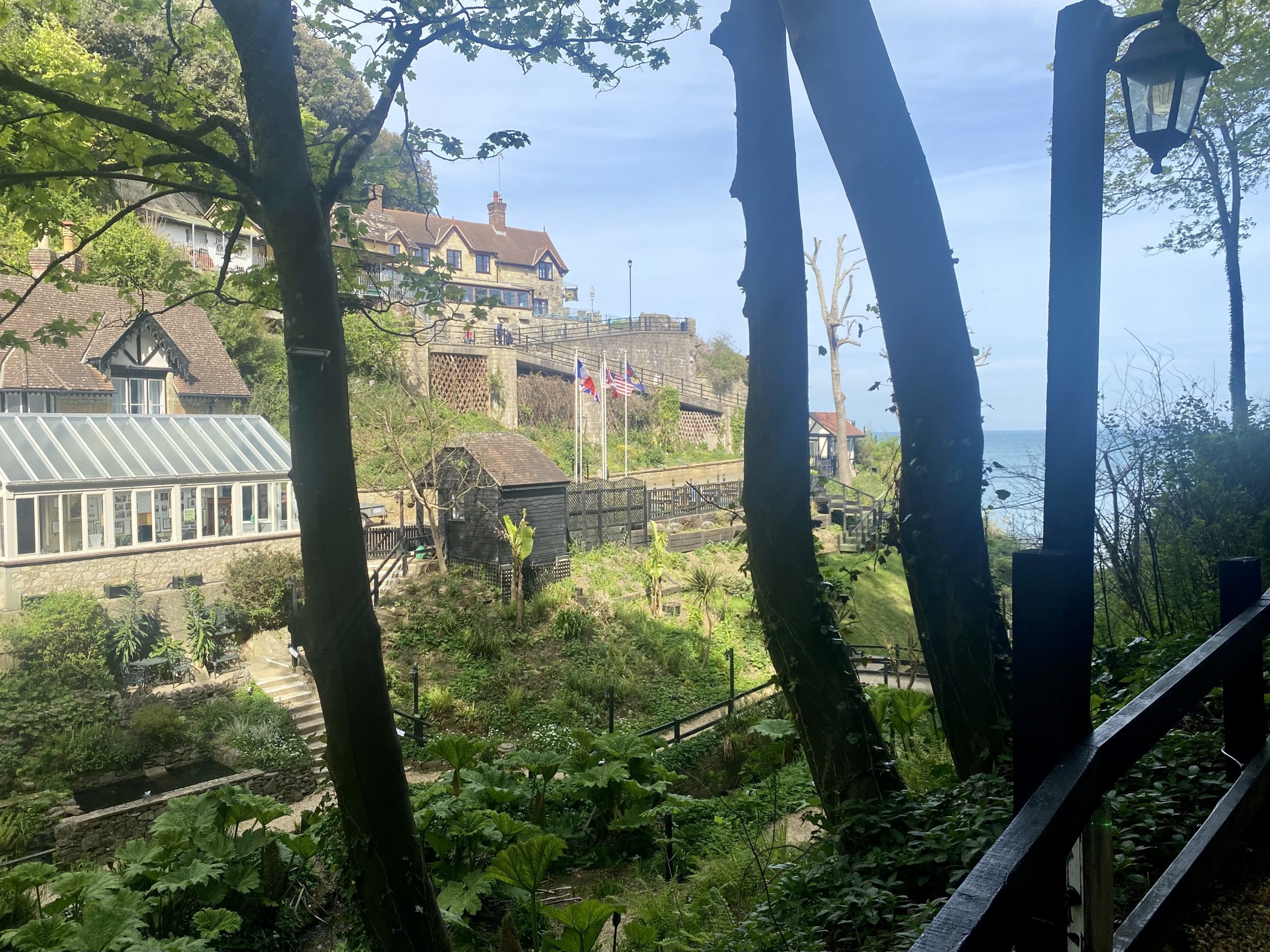 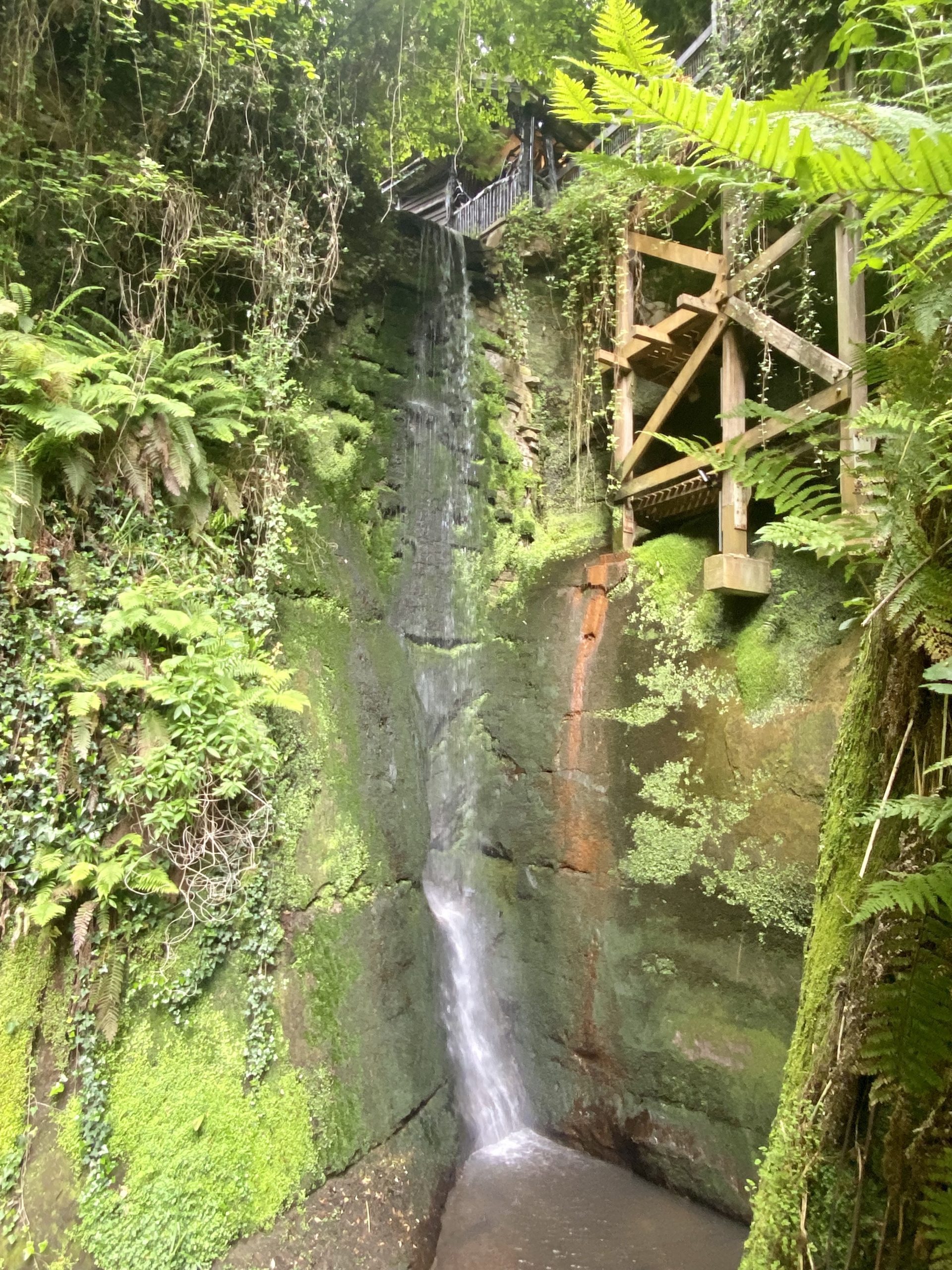 Opened to the public in 1817, Shanklin Chine has long been at the forefront of many childhood holiday memories…

The Chine has been an inspiration to many – from Keats, who wrote some of his best poetry whilst staying in Shanklin and Carisbrooke in 1819, to Jane Austen who famously declared the site as ‘lovely’.

When visiting them you’ll be amazed by the main waterfall, tumbling down the cliff edge from 45 feet and their second, which is equally as stunning, falling from 29 feet. With such a diverse ecosystem the Chine is home to an abundance of wild plant species, some of which are extremely rare. Keep your eyes peeled for visiting wildlife such as woodpeckers, herons, dragonflies and the Island’s famous red squirrels.

Wander the pathways and stop off for refreshments at their Tea Room and then pick up a souvenir from the Antiques Centre. If you’re after a more substantial meal then visit Fisherman’s Cottage Inn, located at the bottom of the Chine, which is our ‘pub on the beach’. There you will find delicious home-cooked food and a great selection of drinks to enjoy with an incredible view, like no other on the Island.

What is a Chine?

The word ‘Chine’ is a local expression from Saxon origin and is now only used on the Isle of Wight and in Dorset.

It means ‘a deep narrow ravine, formed by water cutting through soft sandstone leading to the sea’.

A result of land formation over 10,000 years, it is the largest accessible Chine on the Isle of Wight. There are 21 Chines across the Island, all located along the southern half of the Island from Shanklin around to Colwell Bay.

Shanklin Chine has an impressive drop of 105ft to sea level and covers an area of around three acres. It makes the perfect excursion for a family day out with a vast array of plants and wildlife to spot on your travels, as well as the opportunity to take in the unique geology of the site.

The history and heritage of Shanklin Chine

Shanklin Chine, as an attraction, is over 200 years old and is the Island’s earliest tourist attraction, celebrating its bicentenary in 2017.

The Heritage Centre is a Victorian lodge built on the site of one of the oldest houses in Shanklin.

Visit their Exhibition and see artefacts which illustrate the story of the formation of the Chine, the development of Shanklin as a seaside resort and the life and times of the population during Queen Victoria’s reign. The local fishing industry, smuggling, the Island railway, the building of the pier and much more are all on display there.

In the 18th century the Chine was a rough walk but the few who struggled as far as the waterfall were impressed by its beauty and grandeur. In 1817, William Colenutt, smuggler and fisherman, excavated a path. The Lady of the Manor gave him the concession to charge an admission fee. The path is still used today and opened up the Chine to the public.

In 1819, Keats wrote … “The wondrous Chine here is a very great lion; I wish I had as many guineas as there have been spyglasses in it.”

One of the great secret successes of the war, PLUTO (Pipe Line Under The Ocean) was the idea of Lord Mountbatten, Britain’s Chief of Combined Operations. See the actual pipe that was used at Shanklin Chine in our PLUTO Room. The pipe ran through the Chine and there are still 65 yards of the original 70 miles remaining.

During the Normandy invasion in 1944, forked pipelines from the Shanklin Pier Apron carried petrol under the Channel to Cherbourg, the first taking only ten hours to lay. The pipelines delivered 56,000 gallons a day until the Allies advanced so far that the line was transferred to Dungeness in Kent. Listen to the story in the Pluto Room.

The Fisherman’s Cottage – The Island’s only pub on the beach is where you can enjoy spectacular views. Nestled just beneath Shanklin Chine, Fisherman’s Cottage Inn is the perfect spot to enjoy breakfast, lunch or dinner, including Sunday roasts. Open daily until late, Fisherman’s Cottage Inn makes the ideal stop before visiting the stunning Chine illuminations, making a memorable family evening out. The pub is the perfect starting point to explore the local sandy beach, esplanade and Shanklin Old Village. Access to the Old Village can be made via the Shanklin Cliff Lift further along the Esplanade.

Take in the beauty of Shanklin Chine at their on-site Tea Room. Serving homemade sandwiches, jacket potatoes and Ploughman’s it’s an idyllic spot. Treat yourself to one of our delicious cream teas, where the scones are made fresh daily, before exploring the Chine.
Watch out for the wildlife while enjoying your lunch!

Complete your visit by exploring our new Antiques Centre. Browse a diverse and eclectic collection of antiques at various price points, with wide ranging choices for keen collectors to novices. They carefully source unusual and unique objects and items which change daily. As the Chine is a registered Charity, they very much welcome any donations to sell in their Antiques Centre.

During the evenings in the summer months Shanklin Chine is transformed into something truly quite enchanting. They illuminate the Chine with hundreds of different coloured lights, highlighting the pathways, streams and tumbling waterfalls with dazzling colours. It’s a magical journey for all ages.

Getting to Shanklin Chine

By car: Follow the road signs to Shanklin and park at Vernon Meadow Car Park. Walk down the hill, turning left at Pencil Cottage to access the upper entrance.

By bus: Southern Vectis routes 2 and 3 service Shanklin. Hop off in the Old Village. Head towards Vernon Meadow Car Park and follow instructions in the ‘by car’ section.

Once you’re in Shanklin:
Old Village/ upper entrance: follow instructions in the ‘by car’ section.

Seafront/ lower entrance: Park along Shanklin Esplanade (there’s seafront parking and two large pay and display car parks). Walk to the end of the esplanade, with the beach on your left, and wander up the hill, you will see their signs.