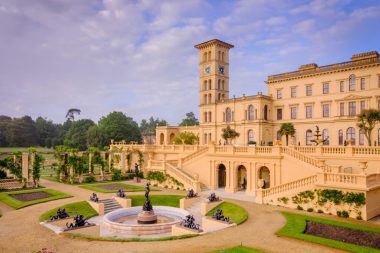 Osborne House, East Cowes, Isle of Wight “It is impossible to imagine a prettier spot” – such were the words of Queen Victoria after her first visit to Osborne House on the Isle of Wight. No trip to the Island would be complete without a visit to this royal seaside palace where Queen Victoria lived with her beloved Prince Albert and their nine children. Take an intimate glimpse into Queen Victoria’s family life as you tour the nursery and private rooms of Victoria and Albert. Marvel at the magnificence of the Royal Apartments including the sumptuous drawing and dining rooms and the richly decorated Indian-inspired Durbar Room. Admire the stunning view from the terraces across the Solent – said to remind Prince Albert of the bay of Naples – and stroll through Osborne’s extensive grounds.

Explore Queen Victoria’s private beach, now open to the public for the first time. “We have quite a charming beach to ourselves,” Victoria wrote in 1845 and it was here that the Queen regularly bathed and where her children learned to swim. The beach is a pleasant 20-minute stroll from the house down the Valley Path or Rhododendron Walk from the Swiss Cottage – stout footwear is recommended in the winter. Enjoy views across the Solent from Queen Victoria’s alcove, and spot seabirds from the shore.

At Swiss Cottage, the inside story of life as a Victorian royal child is revealed. Thanks to funding from donors including the Heritage Lottery Fund, vivid new displays, a garden trail and a new play area enable families to experience for themselves how the children of Queen Victoria and Prince Albert played and learnt in this unique and special place. Discover the interests and personalities of each of Queen Victoria’s nine children in the ‘Childhood at Osborne’ exhibition, play where the royal children played, and step back in time to 1861 as Queen Victoria and Prince Albert join the royal children for afternoon tea. See fascinating objects from the Royal Collection from around the world in the Museum, see the Swiss Cottage garden with the children’s vegetable plots, and enjoy a wildlife trail as you walk down to the beach.